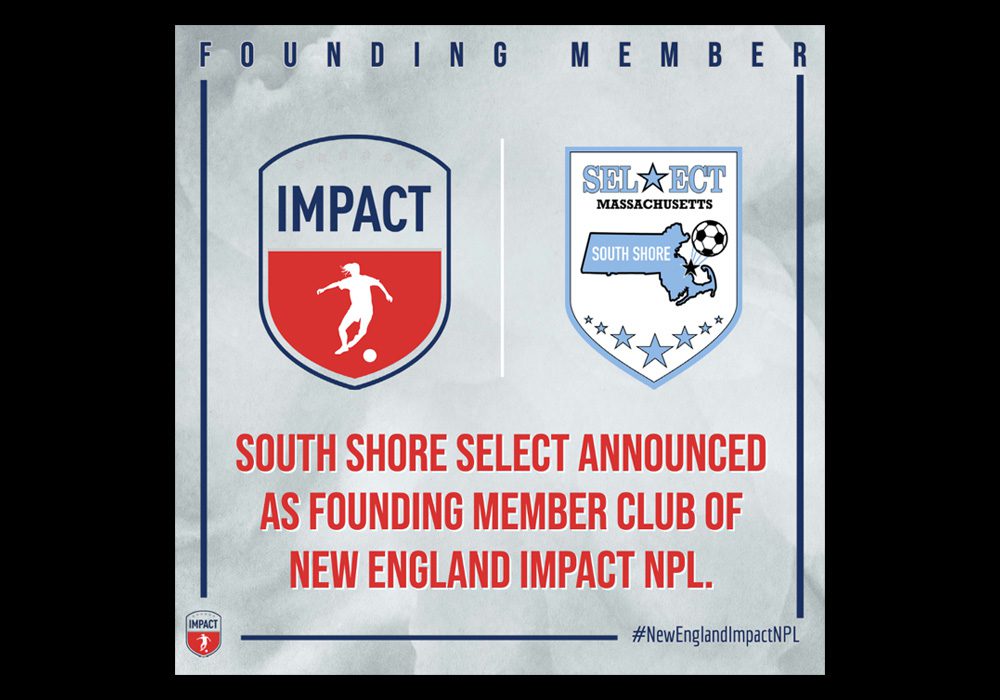 As part of a collaborative effort of like-minded clubs from the New England region, South Shore Select is proud to announce that we are a founding member of New England Impact NPL.

The founding members are South Shore Select, Aztec Soccer Club, Bayside FC, BEST FC, Liverpool FC International Academy, and Spirit of Liverpool USA. Additional club members will be announced in the coming weeks as part of a strategic league growth plan. The opportunity to be a part of the formation of a new league through US Club Soccer represents the best possible development opportunity for our players.

US Club Soccer officially made the announcement here.

US Club Soccer has fully sanctioned the league and embraced our commitment to creating a practical pathway for our players to succeed. This National platform and history of a strong collegiate placement rate will further be enhanced through the additional resources available to Select through the collaborative efforts of the founding member clubs.

One result is all Select teams competing under the US Club Soccer umbrella giving our players access to all of the US Club Soccer benefits such as meaningful weekly competition culminating in a national postseason, player development and national identification platforms, cup-based competition, player health, and safety resources, and coaching education.

Founding member clubs will have full control over league decisions and will be able to direct and create opportunities that directly benefit OUR players.

Below are a series of FAQs that will provide more detail about how this announcement will positively impact Select players now and into the future.

What is the New England Impact NPL?

The New England Impact NPL will offer competitive club versus club competition opportunities for U-13 through U-18/19 girls teams and participation in the NPL pathway. League play will take place during the traditional fall and spring seasons.

Who will compete in the New England Impact NPL?

All teams (2002 to 2008) that formerly competed in the Development Player League (DPL) will transition to the New England Impact NPL effective this spring. South Shore Select Soccer teams will continue to be a part of the New England Premiership (NEP).

What does this mean for my player?

In addition to the introduction of the new league, this alliance of clubs is collaborating to introduce a showcase and event series that will introduce high-level competitions for all of our teams. These showcases will be regionally scheduled and will focus on high-level competition and maximum exposure to college coaches for our senior players.

The league will also be introducing an innovative and proprietary college recruiting pathway series, which will integrate education seminars and activities that will be made available to all league club member players.

Macaroni Kid Featured Liz Lima as a “mom on a mission”
September 8, 2016